The Kayaphuri School in the Kutupalaung Rohingya refugee camp was founded in 2019 by a Rohingya leader who was killed last year. The school was the latest of about 30 such schools closed by the police. Some closed on their own because the police were going to shut them down.

With the March 24 shutdown of the school in southern Bangladesh, no schools remain in operation.

Mohammad Showife was the head of the school. He was working in his office when police raided the building. He told VOA the police took his computer and printer. The next day, police took seats from classrooms and locked the school door. 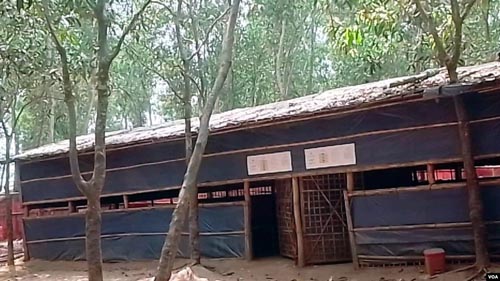 Before it was shut down, the Kayaphuri School was the largest private secondary school for Rohingya refugees stranded in Bangladesh.

"Police asked whether we had any official permission for the school," he said. "We didn't have any in a written format. Our leader…got verbal permission from [an official appointed by the government] to open the school. Now all of a sudden, the Bangladesh government decides to close it down."

Many of the schools were made of wood with cloth roofs. There were few classroom materials inside. But they were very important to the thousands of Rohingya children with very limited ability to go to school in the camps. The government did not give legal status to the refugee-led schools. But the government agreed in 2020 to permit them to operate and promised aid if needed.

Bangladesh’s Office of the Refugee Relief and Repatriation Commissioner provides humanitarian assistance for Rohingya refugees. It said on December 13 that all private schools in the Rohingya camps "must be shut down." They were "illegal" because they did not have official permission to operate.

After the order, police began raiding the schools and seizing school materials, including seats and computers, sources told VOA.

The organization Human Rights Watch said Bangladesh officials threatened to seize Rohingya refugees’ identification documents. They also threatened to forcibly relocate them to a distant island if they violated the ban on the schools.

Bill Van Esveld is with Human Rights Watch. He said: "First the government blocked meaningful education for Rohingya children, then it closed the schools Rohingya set up for themselves, and now it threatens to banish teachers and students to a prison-like island.”

Showife, the head of the school, said he had been fearing a raid after two other private schools were also closed down by police.

Eighth-grader Rabeya Akter, 15, said the closure has ruined her dream of becoming an engineer.

"After we fled Myanmar in 2017, we were idle for a year and a half, but this school gave us" a chance to resume our education, she said. “I am worried because my family might want to marry me off. I don’t want to get married so early.”

Ayatullah is in ninth grade. He said, “I was dreaming of becoming a doctor. Now it's all gone. There are no other ways for us to get further education.”

Officials are defending their actions, saying they have only stopped the operations of “illegal establishments.”

In an interview with VOA, Additional Refugee, Relief and Repatriation Commissioner Mohammad Shamsud Douza said, “Would you allow an illegal establishment to operate in your premises for long? I guess not.”

Douza said the Kayaphuri school did not have permission to operate. He said that some of its teachers were teaching the official Bangla language, which the government bars. It does not want Rohingyas to integrate into Bangladesh and permanently remain in the country.

Abdur Rahim is the leader of the Arakan Rohingya Society for Peace and Human Rights, a Rohingya support group. He told VOA the learning centers teach children up to age 14, but the teaching does not go past second grade.

“That's why we had started those private schools inside the camps so that our children could get secondary level education,” Rahim said.

He added that thousands of children between 14 and 18 years old are now left without a place to learn.

format — n. the form, design, or arrangement of something

verbal — adj. spoken rather than written

banish — v. to send someone or something away

idle — adj. not working, active, or being used

premise — n. a building and the area of land that it is on

integrate — v. to make a person or group part of a larger group or organization

上一篇: Experts Give Advice on Deciding Which School to Attend
下一篇: 返回列表