And now Words and Their Stories from VOA Learning English!

On this program we explore the meaning of words and expressions in the English language.

Today we talk about a saying that comes from the world of carpentry.

Two of the most basic tools for building things are a hammer and nail. With them, you can build many wooden structures from a house to a piece of furniture to a picture frame.

For the nail to go into the wood, you must hit the nail on the flat part at the very top. This is called the head. If you miss, you might damage the wood or injure yourself.

So, our expression for today is “to hit the nail on the head.” 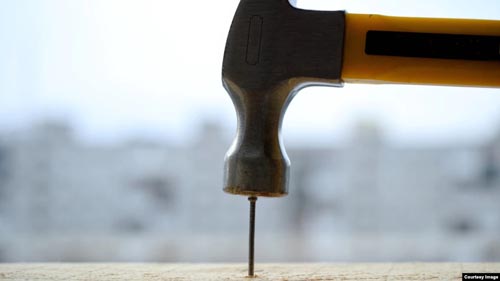 We use a hammer to hammer a nail into wood.

We use it several ways.

When you hit the nail on the head, you got something exactly right. In other words, you were correct. Here is an example:

Hey, remember when you told me that Bob would not last long at his new job?

Yeah, that was last week. I got the feeling from him that he was not enjoying the work.

Well, you hit the nail on the head. He just texted me that he quit his job.

If you have hit the nail on the head, you have also described a situation accurately. That situation can be either good or bad. Here is another example:

How was your camping trip?

It was amazing! I haven’t had that much fun outdoors in … forever!

Yes! She said it was heaven with lots of outdoor activities. And she really hit the nail on the head! We stayed for four days and loved every minute!

So, if you are totally right about something; if you describe something perfectly; if you find the exact answer; or if you do or say the right thing – you have hit the nail on the head!

Word experts claim that by the time Henry David Thoreau used the expression in 1849, it was already a commonly used one. In A Week on the Concord and Merrimack Rivers, he wrote this:

“The poet will prevail to be popular in spite of his faults, and in spite of his beauties too. He will hit the nail on the head, and we shall not know the shape of his hammer. He makes us free of his hearth and heart, which is greater than to offer one the freedom of a city.”

And that’s all the time we have for this Words and Their Stories.

Until next time … I’m Anna Matteo.

carpentry – n. the skill or work of building or repairing wooden things

frame – n. an open case or structure for holding or enclosing something : window frame, picture frame

accurately – adv. without mistakes or errors

campground – n. the area or place (such as a field or grove) used for a camp, for camping, or for a camp meeting

prevail – v. to succeed in convincing : to win against opposition

hearth – n. a brick, stone, or concrete area in front of a fireplace