Harvard University recently offered details of its historical connection to slavery and announced a $100 million fund aimed at studying and dealing with those links.

The findings were released on April 26 in a 130-page report. The university began publicly speaking about its connections to slavery in 2016. That year, the university placed a sign on its campus honoring four enslaved people who worked for two different Harvard presidents in the 1700s. Harvard’s President Lawrence Bacow started the current investigation into the university’s links to slavery in 2019.

The group of investigators included professors who looked into the names and stories of people who worked for no pay. The committee found that the university and its leaders, including four of the school’s presidents, enslaved people. The new report, the writers said, adds to work started in 2007 by Harvard professors and students to show the university’s connection to slavery.

Harvard is the oldest university in the United States. It opened in Cambridge, Massachusetts in 1636, when the area was still a colony of Britain. At the time, putting people to work for no pay was permitted. The report notes that slavery was common around the world and was an important part of the economy in the northeastern colonies, and “powerfully shaped Harvard University.” For example, some people who gave money to Harvard in its early history became rich by buying and selling slaves. 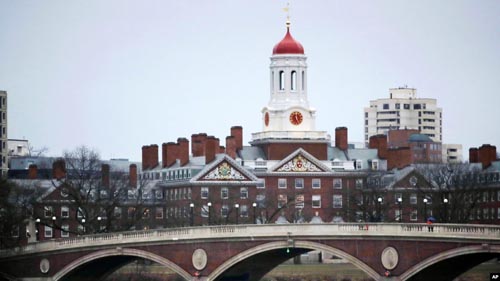 In this March 7, 2017 file photo, rowers paddle along the Charles River past the Harvard College campus in Cambridge, Mass.

The report’s writers said Harvard is now part of the “long and growing list” of American universities “entangled with the history of slavery.”

Enslaved people worked at the university for almost 150 years, until slavery became illegal in Massachusetts in 1783. The school’s report said at least 70 Black people and Native Americans were enslaved. That included people who worked on the university land and in the homes of the school’s leaders.

In addition, the university, which is the richest in the U.S., gained wealth by investing in industries, such as cotton and sugar cane, which used forced labor. Those crops were grown by enslaved people in the American South and the Caribbean Islands. Many buildings at Harvard are named for people who owned other people.

The report notes that Harvard has profited from the idea that slavery in the United States was centered in the American South. In fact, the report says, the economy in the northeastern colonies “thrived” because of their connection to slavery and businesses that used forced labor.

Bacow announced the $100 million fund to deal with, what he called, the “corrosive effects of [slavery] on individuals, on Harvard, and on our society.” The money will be used to make up for the mistreatment of the people who worked for the university but it will not be paid directly to the living family members of Harvard’s slaves.

The report said the university should permit some students at historically Black colleges and universities to study at Harvard for one year at a time.

It also said the school should make education more available for the descendants of slaves in the southern U.S. and the Caribbean area. In addition, the writers said Harvard should offer educational programs to members of Native American tribes in the northeastern U.S.

The report said that even after slavery became illegal, some of the university’s professors taught racial theories about why white people were better than Black people. Some professors did studies on race that researchers have connected to policies of the leaders of Nazi Germany. The report called some of this work, which included photographing Black people without clothing and measuring their bodies, “abusive.”

In more modern times, the report noted, the university was slow to make education and work available to Black people. Between the 1890s and 1940s, only about three Black men per year attended the university. By 1960, the number had only grown to nine in the first year class.

Making up for slavery

The report said the university should spend money to make up for the past but did not clearly say the school should give money to the descendants of the enslaved people who worked at Harvard. Payments to make up for bad treatment in the past are sometimes called reparations. Harvard instead said it will make up for its wrongs through “teaching, research and service.”

Other universities are doing similar things.

At Georgetown University in Washington, D.C., the school is trying to raise $400,000 per year to give to the descendants of the enslaved people sold by the school. At Princeton University in New Jersey, the school of religion started a $27 million fund to make up for enslaving people. And the University of Virginia, founded by U.S. president Thomas Jefferson, created scholarships for the living family members of those it enslaved.

However, some critics say those universities should do more or that they are not following through on their promises. Now that Harvard has released its report, education leaders will want to see how the $100 million is spent and whether it makes a difference.

In the report, Bacow noted that Harvard is “far from perfect” but it always tries to “be better.” The university president said Harvard is committed to following the recommendations and “embracing the challenges before us.”

fund – n. an amount of money that is set aside for a special purpose

entangle –v. to become involved in a confusing and difficult situation

corrosive– adj. causing someone or something to become weak and damaged

descendant – n. the children of a group of people who lived in the past

embrace – v. to accept something