Japanese researchers have developed electric chopsticks that enhance the salty taste of foods. The devices could help people who need to reduce their intake of sodium.

Wiring connects the chopsticks to a small computer device attached to the eater’s hand.

A weak electrical current transports sodium ions from food through the chopsticks to the mouth, said Miyashita. 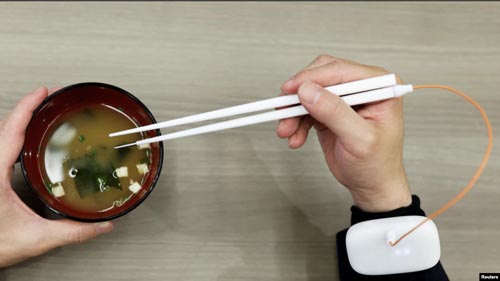 Miyashita and his research team have explored different ways that technology can interact with human senses. He has also developed a television screen that a person can lick to taste different food flavors.

The traditional diet in Japan is salty. The average Japanese adult eats about 10 grams of salt each day. That is two times the amount suggested by the World Health Organization.

High sodium intake is linked to increased cases of high blood pressure, strokes and other conditions.

"To prevent these diseases, we need to reduce the amount of salt we take," said Kirin researcher Ai Sato.

Sato added that if Japanese people try to reduce salt intake in the usual ways, they will need to cut many of their favorite foods from their diet. Otherwise, she said, they would have to eat bland, or flavorless, food.

Miyashita and Kirin are improving their chopsticks and hope to have them ready to sell as early as next year.

lick – v. to pass the tongue over

flavor – n. the quality of something that affects the sense of taste