The study by The Associated Press-NORC Center for Public Affairs Research finds that despite strong feelings against that requirement 56 percent of Americans favor requiring masks for people on planes, trains and public transportation.

There have been arguments and physical violence against flight attendants who asked airline travelers to wear masks. Those against the requirement made up 24 percent of the people studied.

Researchers talked with people around the country from Thursday through Monday. Then, a federal judge in Florida ruled that the national mask requirement on airplanes and mass transit was “unlawful.” Airlines and airports immediately ended their requirements that passengers wear face coverings. 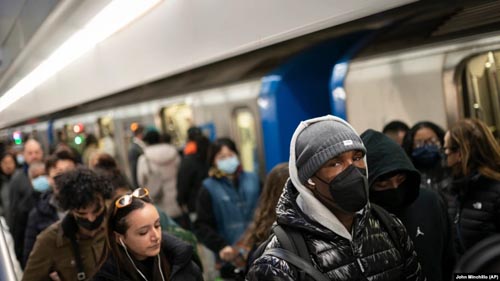 Mass transit riders wear masks as they commute in the financial district of lower Manhattan, Tuesday, April 19, 2022, in New York.

The Transportation Security Administration stopped enforcing the mask requirement. The Justice Department announced on Tuesday that it will not appeal the ruling unless the Centers for Disease Control and Prevention says it is still necessary.

The study shows a wide divide by political parties on the issue. Among Democrats, 80 percent favor and just 5 percent oppose the requirement. Among Republicans, 45 percent are opposed compared with 33 percent in favor, with 22 percent saying they had no feelings either way.

Vicki Pettus recently moved from Frankfort, Kentucky, to Clearwater, Florida, to be near her grandchildren. She said she enjoys the beauty of the area, but does not like the "very lackadaisical attitude" by Governor Ron DeSantis, a Republican, about masking. She said she will continue to wear her mask to protect against the coronavirus, including around her community and on the plane when she travels.

But Kriste Lee, who works in sales in South Florida, wants to fly mask-free when she travels next month. Lee said nobody is stopping anyone from wearing masks if they want to. She is not vaccinated.

The continued support among Americans overall for mandating masks on transportation comes even as worries about COVID-19 are at their lowest points of the past two years. Just 20 percent now say they are “very or extremely worried” they or a family member could be infected. That has gone down sharply since December. Another 33 percent now say they are “somewhat worried,” while 48 percent say they are not worried at all.

Betty Harp is an 84-year old in Leitchfield, Kentucky. She is "very worried" after losing a lot of friends and family to the virus.

"I know COVID is still here. It's still around," said Harp. She says she is a Republican-leaning independent. "I think we should all be wearing masks for a little while longer."

The study also shows about half of Americans favor requiring masks for workers who face the public. Support is similar for requiring people at crowded public events such as sporting events and movies to wear masks.

On these questions there are similar political party differences. Seventy-two percent of Democrats favor requiring people attending crowded public events to wear masks. Twenty-five percent of Republicans are in favor and 49 percent are opposed to requiring public-facing employees to wear face coverings.

The AP-NORC poll of 1,085 adults took place from April 14-18 using a group of people designed to be representative of the United States population.

despite - prep. without being prevented by (something) — used to say that something happens or is true even though there is something that might prevent it from happening or being true

mandate - v. an official order to do something

lean – v. to tend toward something