Russian President Vladimir Putin claimed victory in the battle for Mariupol on Thursday. But he has ordered his troops not to attack the large, steel factory containing the last Ukrainian fighters in the city.

Instead, he told his forces to surround the Azovstal factory “so that not even a fly comes through.”

Russian troops have attacked the southeastern port city of Mariupol since the early days of the war. The city is largely destroyed. Top officials have claimed it was about to fall, but Ukrainian forces continued to fight.

In recent weeks, a few thousand Ukrainian soldiers were in the factory’s tunnels and bunkers. Russian forces continued to bomb the site and demanded that they surrender. 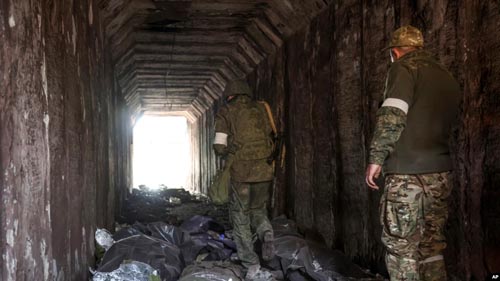 Servicemen of the Donetsk People's Republic militia look at bodies of Ukrainian soldiers placed in plastic bags in a tunnel.

But on Thursday Putin declared victory without taking the factory.

“The completion of combat work to liberate Mariupol is a success,” he said in an appearance with his defense minister. “Congratulations.”

Ukraine denied that there is a Russian victory in Mariupol.

"This situation means the following: They cannot physically capture Azovstal. They have understood this. They suffered huge losses there,” said Oleksiy Arestovich. He is an adviser to Ukrainian President Volodymyr Zelenskyy.

By calling the mission a success, Putin may be seeking to take the attention off the plant. The factory has become a worldwide symbol of resistance. Even without the plant, the Russians appear to have control of the rest of the city and its port.

The capture of Mariupol would be the Kremlin's biggest victory in the war in Ukraine. It would help Russia secure more of the coastline and provide land access between Russia and the Crimean Peninsula, which Russia seized in 2014. It would also permit Putin to move more forces to the larger battle for Ukraine’s eastern, industrial area of the Donbas.

Shoigu said the site was blocked off and predicted it could be taken in days.

“I consider the proposed storming of the industrial area pointless.” Putin said. He said he wants to protect “the life and health of our soldiers and officers."

Putin may be hoping Russian forces can wait for the defenders to surrender after running out of food or ammunition. The attack of the plant could also continue.

More than 100,000 people were believed to be trapped with little or no food, water, heat or medicine in Mariupol. The city had a prewar population of about 430,000.

Chris Parry is a former, British high-ranking military official. He told The Associated Press: "The Russian agenda now is not to capture these really difficult places where the Ukrainians can hold out in the urban centers, but to try and capture territory and also to encircle the Ukrainian forces and declare a huge victory.”

Russian officials have said capturing the Donbas is the war’s main goal. Luhansk is one of the two regions that make up the Donbas. The governor there said Russian forces control now 80 percent of the area. Before Russia invaded, Ukraine controlled 60 percent of Luhansk.

Meanwhile, Western powers are increasing their support of Ukraine, moving to send additional heavy weapons to the country.

bunker — n. a strong building that is mostly below ground and that is used to keep soldiers, weapons, etc., safe from attacks

liberate — v. to free from being controlled by another person, group, etc.

pointless — adj. having no meaning, purpose, or effect

agenda — n. a plan or goal that guides someone's behavior and that is often kept secret

territory — n. an area of land that belongs to or is controlled by a government

front — n. an area where military forces are fighting

region — n. a part of a country, of the world, etc., that is different or separate from other parts in some way