Canada has two official languages – English and French. But recent events in Canada have caused a new debate over whether French speakers face discrimination.

Canada’s largest railway company, CN, is based in Montreal. The city is in the province of Quebec, where 95 percent of the population speaks French. However, none of CN’s recently named nominees for its corporate board are native French speakers. After public anger, the company said it plans to search for a French-speaking board member in the coming months.

The question of whether Canadian business leaders should be bilingual in French and English began receiving attention last November. The attention came after comments made by Air Canada President Michael Rousseau. Rousseau said he did not have the time to learn French. The airline leader later publicly apologized for what he said.

Canadian law requires state-owned companies like CN and Air Canada to provide services in both English and French. The same is true for places like airports and government ministries. 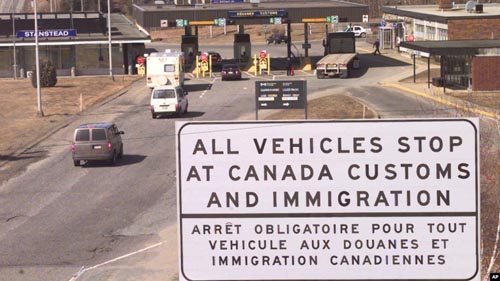 FILE - This April 16, 2001 file picture shows a sign written in both English and French as vehicles approach the Canadian-U.S. border at Stanstead, Quebec, Canada.

Canadian Prime Minister Justin Trudeau is bilingual. He said this week he was concerned about the lack of French speakers on CN’s board.

"French-speaking Canadians across the country should see themselves reflected in our major national institutions,” Trudeau said.

Of Canada’s 37 million people, only 8 million speak French. The Canadian constitution in 1982 officially protected the French language as an official language. But the recent happenings have reminded people of the continued fight to support the language.

A recent public opinion study found that over 90 percent of Canadians support bilingualism as part of Canada’s culture. However, only 20 percent of the population can speak both French and English.

Stephane Beaulac is a law professor and co-director of the University of Montreal’s National Observatory of Linguistic Rights. He said that, in the past, supporting the use of French meant to be in favor of the separation of Quebec from Canada. Quebec is a mostly French-speaking province in Canada.

“Things have changed today,” Beaulac said, “so people are more daring to challenge the domination of English.”

Some Canadians criticized Trudeau’s decision last year to not choose a French speaker as Canada’s governor general. The position serves as Queen Elizabeth II’s official representative in the country. Instead, Trudeau appointed an Indigenous Canadian, Mary Simon, to the position. She is from Nunavik in northern Quebec. She speaks English and an Inuit language, but not French.

Stephanie Chouinard is a political science professor at the Royal Military College of Canada. She said, "Everyone must be able to be served in their preferred language since few Canadians are truly bilingual.”

reflect – v. to show or make (something) known

linguistic – adj. of or relating to language​

challenge – n. a difficult task or problem; something that is hard to do

Indigenous – adj. produced, living or existing in a certain place or environment

Inuit – n. an Indigenous group of people living near Artic in Canada, Alaska, and Greenland.

subtitles – n. words that appear on the screen during a movie, video or television show and that are translations of what the actors are saying