Scientists in Guatemala believe they have found the earliest example of the Mayan calendar inside the remains of an ancient building.

The archeologists found pictures, called glyphs, from a Mayan pyramid. The glyph represents the day called “7 deer.” It is one of 260 days with special names in the Mayan calendar.

The researchers believe the glyph is over 2,200 years old. It shows the Mayan writing for the number seven above a picture of an animal called a deer.

The picture came from a wall painting inside the pyramid known as Las Pinturas. It is in San Bartolo, an ancient Mayan place that became famous in 2001 when archaeologists found a buried room that contained colorful wall paintings, or murals. 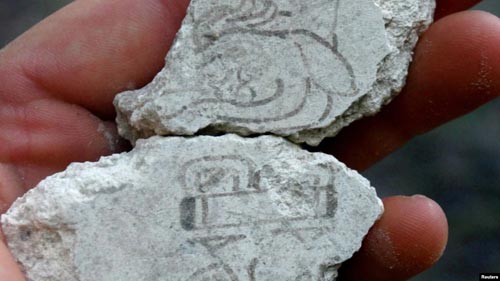 The pieces of the wall painting found at the San Bartolo site in Guatemala show the earliest uses of the Mayan calendar.

Those murals are thought to be about 2,100 years old. They show images of ceremonies and the ancient stories of the Mayan people.

The deer glyph came from the same Las Pinturas pyramid. But it is older.

Researchers believe the Mayans built smaller religious structures and then built the pyramids on top of them.

David Stuart is a professor of Central American art and writing from the University of Texas. He wrote about the discovery in the publication Science Advances.

He said the pieces from the mural fit in your hand, but they were once attached to a stone wall. He said the wall was torn down when the ancient workers were building the newer space that became the pyramid.

He said the paintings from the older period are all broken up, unlike the newer murals found in 2001.

Until the discovery, the oldest known example of the Mayan calendar came from about 2,100 years ago.

The calendar is thought to be one of the top achievements of Mayan culture. It followed the movement of the sun, moon and planets and was based on a 260-day cycle. The Mayans also counted time based on the sun and considered one year to be 365 days. There was also a system based on the moon.

The Mayans had a system of 800 glyphs. The earliest examples come from San Bartolo in the forest of northern Guatemala. The place was important to early Mayan society for over 600 years, until about 1,800 years ago.

About 7,000 mural pieces have been found at San Bartolo. Some are as small as a fingernail, and others are over 400 square centimeters.

Heather Hurst of Skidmore College in New York state is a co-writer of the study. She called the pieces a “giant jigsaw puzzle.”

The notation of “7 deer” and other calendar glyphs are shown on 11 mural pieces from San Bartolo. Researchers say that means the calendar was in use for a long time before the murals were built.

As a result, Hurst believes older examples of glyphs from the calendar might be found in other places. Hurst said the culture’s “well-established tradition of writing and art” shown on the mural pieces was “impressive.”

Some Mayan communities still use the ancient calendar.

Stuart said the calendar has been used for at least 2,200 years, even during times of “incredible change, stress and tragedy.”

calendar –n. a system for organizing the days of the year by month

archeologist –n. a scientist who studies past human life by looking at bones, tools and structures of ancient people

pyramid – n. a large structure with a square base and sides shaped like triangles

achievement – n. something that has been done or created through great effort and hard work

cycle – n. a series of events that happen again and again

jigsaw puzzle – n. a game made of small pieces cut into shapes that fit together to form a picture

stress – n. a state of mental tension and worry caused by problems and difficulties